The school has run the DofE successfully for many years now.  Mr Mitchell leads the DofE programme at Applemore College. The current dates, letters and lists can be found at the bottom of the page.

8 students from year 10 successfully completed their COVID delayed practice expedition in May.

Both groups were in good spirits at the start point, despite the gusting wind and the forecast of torrential rain. The groups set out on the Saturday morning, excited for the day, but weighed down by their heavy packs. Walking from Rhinefield drive, with their staff leaders checking their navigational skills on the way, much of their training came flooding back. When they arrived at the underpass beneath the A35, the groups set out unaccompanied, their fate in their own hands. 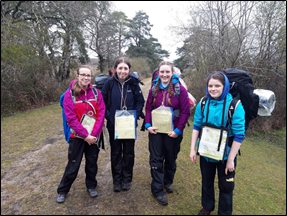 After a few navigational hiccups, both groups arrived safely at the campsite near Pickett’s post – tired, but pleased that the predicted storm never arrived. They erected their tents and assembled their stoves. Spirits were lifted quickly by a hot meal and desert in particular, so much so that washing up didn’t seem like too much of a chore.

COVID restrictions meant that rather than spending the night under canvas, the groups had to head home overnight, before returning to cook breakfast in the morning. I know that it would have been difficult to leave the home comforts behind so early on a Sunday morning. Both groups go packed quickly after a leisurely breakfast and were keen to complete their walk in good time. Their skills had obviously improved during the weekend as both groups finished ahead of schedule.

The groups are scheduled to complete their assessed expedition in July – this time being able to camp overnight. Some of the participants will have completed their Bronze award at this point, having already finished the Volunteering, Physical and Skills sections.

Thanks to Mr Greet, Mr Saunders, Mrs Lamkin, Mr Woods and Mrs Godfrey for giving up their time at the weekend.

The Duke of Edinburgh award will be offered to our current year 8 and year 9 in the Autumn term – it could be an excellent incentive for students to re-start those sports and hobbies that have been disrupted over the past 18 months or the spur to try something new!