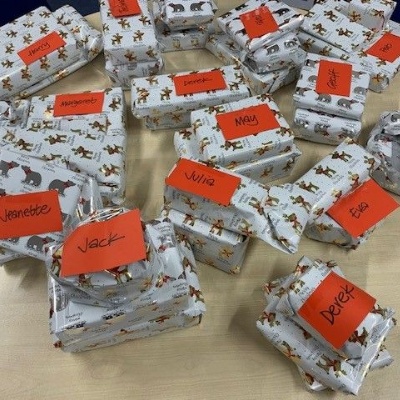 Five times a year the students at Applemore have a day dedicated to PSHE and a big part of those days is raising money for and awareness of specific charities.

In December, Year 7's focus was on the Elderly in the Community.  They looked at how some of the older people in our community can be quite lonely at Christmas.  The Year 7 students brought in gifts and held a Charity Fayre to raise money.  Some of the gifts were taken to the residents of Ashlett Creek Rest Home where some of our Year 10 students go on work experience.  The Year 11 students wrote Christmas cards and Miss Smith and Mr Poole took four Year 7 students to deliver them.

The additional money the students raised was given to Families Matter in Totton, who used it to buy gifts for some of the people they work with, who might not have as much as others at Christmas.

One of our Year 10 students, Grace, works voluntarily with Operation Help the Homeless in Southampton and as a result we have decided to make this our chosen charity when Year 8 do their Charity Awareness Day at the end of January.  Students will have assemblies in the run up to the day and look at why people end up on the streets and what is being done to support them.